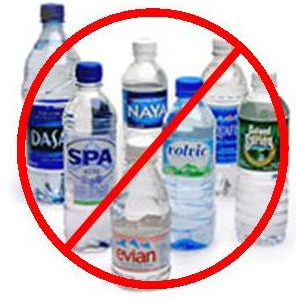 As we all know, Santa Monica is a city that takes sustainability seriously. Although there is no single path to sustainability -  and all of us make  compromises in negative environmental circumstances beyond our control, its critical that we don't create unnecessary damage in circumstances that are within our control. That's why I'm writing to you today.

At two recent candidate events I attended - one hosted by a neighborhood organization and another by a group concerned about airport pollution, large amounts of plastic water bottles were purchased and brought on-site by organizers. In both cases when I raised concern about this with the organizers, they said that after purchasing the plastic water bottles, they had second thoughts and would probably not do so again in the future.

As much as I was pleased to hear this, I am doubly concerned that a host of an upcoming debate - which has had this concern voiced to them on multiple past occasions - has nevertheless still chosen to purchase unnecessary plastic water bottles for their forums this year.

I know that these hosts have a long record of positive contributions to our community, and perhaps they chose to justify this unnecessary environmental damage because of the perception that it will be a 'convenience' to the candidates.

If that is the case, then the only way we can stop these negative practices is by stating ourselves, up front, that we as candidates do not want plastic water bottles purchased on our behalf. Why is this so important?*

Collectively,  the residents of this city have asked our city government to set an example for the rest of us in practicing sustainability, and on the issue of plastic water bottles, the City has discontinued this practice at the community meetings it sponsors (see more below).

Commercially, many years ago our City Council passed a local ordinance making it unlawful for local restaurants to bring water in any kind of glasses, if the customer doesn't ask for it - whether in glass, paper or plastic glasses/bottles, because of the waste in bringing water to people who didn't ask for it - and we made that choice long before today's drought makes such waste even more destructive.

I personally plan to bring my own resusable container to all future forums and either fill it up beforehand, or on site from city drinking fountains.

I would encourage other candidates to both do the same and reply to this email, which contains the email addresses of all of the hosts of future candidate forums (that I am aware of), and ask them not to include any plastic water bottles with their events, so we can put an end to this practice.

Thank you for considering this issue. For more about some of the environmental issues with plastic water bottles see below.

*Among the many reasons we in Santa Monica should stop buying water in disposable plastic bottles, where Santa Monica City water is safe to drink:

We’d save the nonrenewable fossil fuels that are used in the plastic. The oil we use for plastic water bottles could fuel millions of cars for a year.

We’d save greenhouse gas emissions by keeping millions of tons of CO2 out of the atmosphere, which are burned in making and transporting plastic water bottles..

We’d save water. Twice as much water goes into making a bottle as its contents.

1) Resolution adopted by Council in 2007 where the City committed to eliminate the purchase of bottled water: http://www.smgov.net/departments/council/agendas/2007/20071127/s2007112701-J.htm (this will take you to the staff report - the resolution is linked to the staff report)

2) Memo from the City Manager in 2010 directing staff to eliminate the purchase of bottled water: https://d3n8a8pro7vhmx.cloudfront.net/feinstein/pages/116/attachments/original/1411421875/Bottled_water_memo.pdf