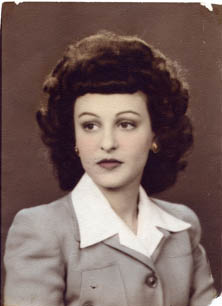 Beth Feinstein, my mother, passed away peacefully at 2:16 am, February 22, 2007. Mercifully, she was lying in her own bed at the time, at the assisted living facility in Santa Monica, California, that had been her home for the past year and a half.

Throughout her life, my mother gave me the gift of absolute unconditional love, with an open heart that always accepted me, no matter what I did or said.

Even though in the last few years she had Alzheimer’s disease and sometimes forgot other people and places in her life, she and I remained intimately and integrally connected. Not only did she not forget me, but I could walk into her room in the middle of the night with her deep asleep, and she would sense my presence and come fully awake and focused upon me within seconds. 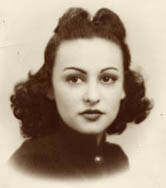 Born on February 16, 1920, Beth Feinstein was the youngest of six children – Betty, Bill, Dave, Mary and Shirley -- born in Chicago and raised there, as well as in nearby Skokie.

In her early 20s, she worked in the fashion industry on Michigan Avenue in Chicago, and also did some modeling on the side. Throughout her life, down to her last days, she was a beautiful dresser, complementing her good looks with clothes that were always fashionable and tasteful, but not pretentious. Understated but attractive and just right – that was my mother. 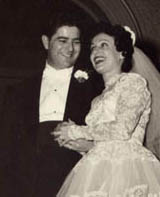 By the time she was 30, she met my father on a blind date during a visit to her sister Shirley in St. Paul, Minnesota, fixed up through a friend of Shirley’s husband Jerry Londer. She and my father courted for four years, with my father eventually flying to Chicago to propose. Thank God she accepted.

In February 1959, my mother and father traveled to Athens, Greece, where she chose me and took me home with her when I was a three-month-old baby suffering from malnutrition in an orphanage there.

My mother gave me life in a way that many biological children often are not lucky enough to receive. When I was a baby, she read to me every night; enabling me to read by the time I was two-and-a-half years old, beginning a pattern of sharing everything she had with me that continued until her last days. Both my mother and father also quit smoking cigarettes after adopting me. The love they had for me led them to not want for me to start.

We first became a family in a double bungalow house in Highland Park, Minnesota, a neighborhood of St. Paul. As a further commitment to me, we soon moved to St. Louis Park, a Minneapolis suburb, because it had the number one ranked school system in the state at the time.

As a young child, my parents bought me many, many books, helping to satisfy my hunger for learning, a hunger they helped create when my mother read to me as a young child.

During the 1960s and 70s, my parents raised me in St. Louis Park and gave me every advantage to decide what I wanted to do in life, even letting me make decisions on my own at a very early age, and also taking me out on Saturday nights with their adult friends when I was a small child, helping me experience far more in my formative years of adult life than most children do.

They also taught me a good sense of ethics and values by living them themselves, making ‘doing the right thing’ something that I could chose simply by seeing it around me, rather than feeling like it was forced on me and thus something to reject.

When I went away in 1977 to Carleton College in Northfield, Minnesota -- my mother and father kept the connection, often driving the hour from Minneapolis just to have dinner. Or I would drive to them – keeping our family close. 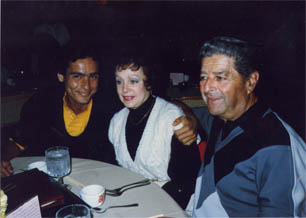 In late 1982, I moved to Southern California where my parents had a winter home in the Rancho Mirage area. After I moved to Santa Monica in 1984, their proximity in the desert every winter meant that in addition to my periodic trips back to Minnesota, we could easily be together in Rancho Mirage or Santa Monica, with only a two hour drive.

In 1992, my father was struck with crippling brain cancer, which combined with the chemotherapy that was used to try and stop it, weakened him and led to other diseases as well. My mother single-handedly nursed, loved and cared for him alone for five months in their apartment, until it was no longer possible to keep him at home and he had to go to a nursing facility.

When my father passed away in July 1992, I stayed with my mother for six weeks in Minnesota before returning to California. We shared the grieving process together.

The ensuing years were very difficult ones for my mother, because my father had passed away right at the time they had planned to retire in California, leaving her without her husband for the next 14 and a half years. She knew he went too soon, and that bitter turn of events ripped my soul every time I left her after a visit, knowing that she had to face her days and nights alone after being married 38 years.

Yet, she didn’t complain and, instead, persevered with class and dignity.

In 1996 I invited her to come to Santa Monica during my first City Council campaign, which she did, and attended my events as a good luck charm. Even though I have a strong personality, I told her that I needed her there for support and to make my experience truly complete – and I meant it.

Then, in the late 1990s, she began to be tormented with Alzheimer’s disease, making her isolation without my father that much more unbearable. Literally I felt, she began to die of loneliness. I begged her to come join me for good in California and eventually she agreed. 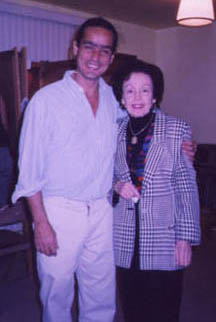 In July 2000, she moved to Santa Monica. With wonderful timing, she arrived for my successful Fall 2000 re-election campaign to the City Council, and then saw me appointed as Mayor.

This mitzvah meant that, over the next two years, she was able to accompany me to the various banquets and other ceremonial functions I attended as Mayor, enabling her to beam with pride as she saw her son be successful in terms she could embrace and understand. Each time we went to an event and I proudly introduced her to others, they would all tell my mother what a good job I was doing for people. This made her very, very happy. In addition, because she was such a good dresser, she loved seeing me in a sport coat, which going to all of these functions together enabled her to do.

Although we enjoyed these blessings together, what meant the most was the ability for my mother and I to spend close, personal, family time together. She was in California more than six and a half years. During that time, I got to see her almost every day that I was in the state – sometimes for a veggie burger at Izzy’s or the coconut curry tofu at PF Chang’s or a salad at Souplantation, her favorite meals and places to go. Or sometimes we’d just sit in her room and be together, not needing to say anything; happy we were just in each other’s presence.

At both of the assisted living facilities where she lived – Ocean House and Ocean Villa - each time I walked through the door, she introduced me to her friends, saying ‘my son’, ‘my son’. In her latter days, when she had increasing trouble speaking and making her thoughts clear, she would still touch my cheeks, gently caressing them with a love that would bring tears to my eyes and bring time to a stand-still. Even as she became less mobile and not able to do things for herself, if I got up to get her something to drink or something else she needed, if we were eating she would say to wait, because she wanted to make sure I had something to eat first.

Her favorite piece of art was a glass sculpture called “a mother and child’, with a child cradled in the lap of the mother, the two looking lovingly at each other. That is how I will always remember her.

I’ve had a life of great privilege; because of the numerous opportunities my parents gave me -- including a great formal education, traveling the world and the freedom to pursue my political passions.

But in the end, the time with my mother in the last few years is what helped me truly grow into a full human being. Just as she cared for me as a helpless orphan, I’ve been blessed with the opportunity of giving back by caring for her in her very vulnerable state these last few years.

In our last days and hours together, we were both so fortunate that we got to say all of the things and express the feelings that a mother and child would want to. There are no regrets, and the unconditional love we both experienced fills me with joy and emotional security even as I grieve. And as much as I will miss the unbelievable opportunity I had every day to simply go down the street and see her, I know that I have an angel looking over me.