We have many great parks in Santa Monica. But for a city as dense and populous as we are, we are well short of enough open green space - for families, recreation, the environment and our health. Several of our neighborhoods are particularly deficient, and two-thirds of Santa Monicans are renters with little or no open space of their own.

Its simple. We need more land for parks, recreation and open space.  I support bold steps:

•  Cover the I-10 freeway and put parkland on top - for a total of 17 blocks - from Ocean Ave. to 4th St., 11th to 17th St., and 20th St. to Cloverfield Bl. When on the City Council, I successfully proposed to include "consider the development of freeway parks" as a policy objective in the city's Open Space Element. It is 17 years later now and little has been done. We need to begin planning this legacy project today.

•  Convert Santa Monica airport into parkland. Back in 1926, Santa Monica residents voted for a park bond to purchase the land upon which Santa Monica Airport sits today.  Its our land - we own it - and its our right to decide what to do with it. We can start with the 45 acres on the 'quit claim' parcel that we will take control over in 2015. Its time we regain planning say over land we own.

My record on the City Council, played a leading role in expanding parks and open space: 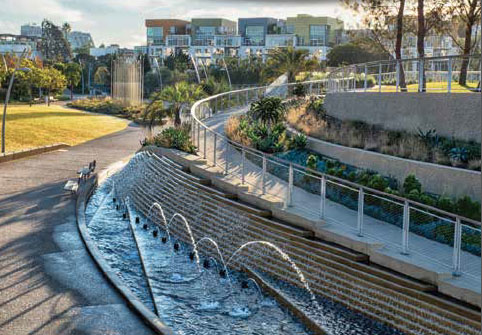 •  Tongva Park - I was an early proponent and lead instigator to  facilitate the City Council's historic move to buy 11.3 acres of land from the RAND Corporation in November 1999, leading to the six acres of beautiful Tongva Park today. That purchase eliminated 305,000 sq. feet of proposed office space from across City Hall, and opened up the view corridor to the Pier and the sunset. In December 1993, I played a lead role in qualifying a residents referendum against the Civic Center Specific Plan, arguing that plan had too much office space and not enough open space.

• Virginia Avenue Park Expansion - I successfully advocated for an extra $3.5 million for public land acquisition in the first budget I voted upon on the City Council, which gave the city flexibility to make a key purchase when land did become available - which it did next to Virginia Ave. Park at 2101 and 2115 Pico Boulevard (the old Plastic Mart and the building adjacent). The new buildings house approximately 14,600 square feet for youth oriented program activities. This unprecedented land acquisition set-aside began with my working with the City Manager early on in the budget process to identify a potential source for those funds, then making the case to the Council to approve moving the funds into land acquisition.

• Restoration of 415 Pacific Coast Highway for public use - In 1997-1998, I co-chaired a City Council-appointed working group that oversaw creation of a plan to restore 415 PCH - the old Sand and Sea Club - to public use, with a restoration of the historic buildings and pool, the creation of a new beach park, plaza and courtyard, and non-profit office spaces. This plan eventually became the Annenberg Community Beach Club.  This was an enormous victory for residents of Santa Monica, because at one point this public land was proposed to be a luxury hotel. In 1990, I was part of the residents movement that defeated the luxury beach hotel project at the ballot box. Now its a public facility serving the entire community.